The eight-year-old gelding, who is by Everdale and shares many qualities with his super sire, performed a polished test to score 78.67%, the highest score of the National Dressage Championships so far.

Imhotep is owned by Coral Ingham and Carl Hester, and was bought as a youngster after he was spotted by Henry Boswell in the Netherlands.

“He sent me a video of the horse and I ended up buying him from him,” said Carl. “It’s the only time I’ve bought a horse from a video and I wouldn’t recommend it but when I saw him get off the lorry I was happy!

“He was seriously sharp as a youngster, everyone fell off him!”

Imhotep, known as Pete at home, is certainly redeeming himself now though, with Charlotte explaining that much of the grand prix work is already in place. She described Pete as incredible to ride, and is very excited about taking him up to the higher levels in 2022, but there is still a question mark over whether it will be her or Carl who might end up riding Imhotep in the future.

“He is an amazing horse,” confirmed Carl. “He has so much talent for the grand prix work and he is going to be amazing – he’s for the Paris Olympics in 2024, but whether it’s for me or Charlotte is still under discussion. When I say under discussion we’re not really talking about it – it’s the elephant in the room!”

For now though, Pete is taking everything in his stride – even if a week at the National Dressage Championships did come as a slight shock to the system after just being ticked over at home while Charlotte competed at the Tokyo Olympics, and then the European Championships last week.

“This horse lives in the field, and he looked like a broodmare when we got back from the Europeans. The nationals have been the most amazing diet for him: he arrived fat and he’s going home looking fit,” laughed Carl.

Pete is already gaining a legion of fans thanks to his striking looks, bouncy way of going and fun, friendly demeanour.

“He reminds me of Alex the lion from Madagascar, you should see him when his plaits have just been taken out!” exclaimed Charlotte.

The PSG gold freestyle proved to be a high quality class, with plenty of spectators taking advantage of the September evening sunshine and super sport on offer to enjoy the evening in the Somerford stands.

Second to Charlotte Dujardin having put up a very strong fight for the top spot was Becky Moody, who had also finished as runner-up in the previous day’s PSG riding the stunning Dante Weltino x Jazz gelding Jagerbomb. Becky posted 76.13%. 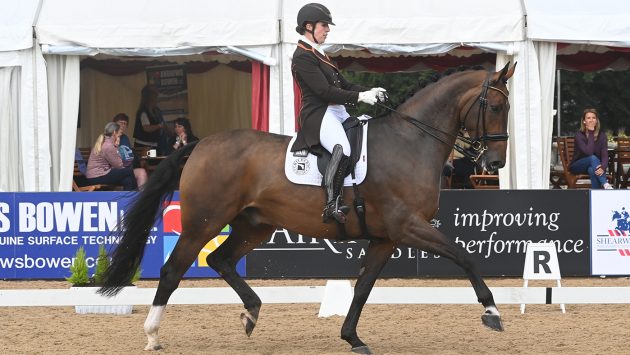 Becky Moody and Jagerbomb at the 2021 National Dressage Championships

The pair rode a delightful test to music from Sherlock, with a beautifully symmetrical floorplan featuring steep, sweeping half-passes and smooth tempi changes on a deep loop. The seven-year-old, who will also compete in his age class this weekend, is another who looks incredibly promising for grand prix, displaying some super, if uncalled for, piaffe following his prize-giving.

In third with a punchy, high-energy performance was Alice Oppenheimer riding the small but powerful Headmore Dionysus, who is British-bred by Dimaggio out of the Headmore Stud’s late foundation mare Rubinsteena.