Four star eventer Emily Beshear went overseas for the Blenheim CCI3* in England last weekend.  Emily and her lovely horse Here’s To You aka Quincy competed at Rolex earlier this year.  Emily owns and operates Brickland Farm out of Somerset, Virginia along with her husband and top sport horse vet, Jeff Beshear.  For much more from Emily, check out her website and Facebook.  Today Emily checks in with a report from show jumping day at Blenheim.  Many thanks to Emily for writing and thank you for reading. 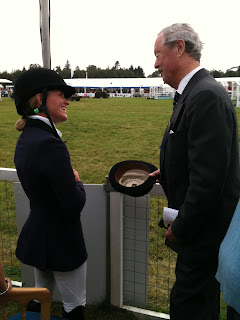 Meeting the Duke of Marlborough

Apparently when you host a major three-day event on a private property the owners so have a say in the proceedings.  We were made well aware of that when the Sunday morning vet inspection was scheduled at 7 am! because they had to finish the day by 4:30 at the request of his grace, The Duke of Marlborough. Normally it would not seem to be that great of a challenge to get done at that hour but at Blenheim your talking about close to 200 horses, almost half to show jump and the others still needing to run the cross-country for the CIC***.  So it was an early morning and all of our practicing the night before on the jog lane helped Quincy to do what we needed, jog straight and sound, and we were passed on the first go.

Now to plan for the show jumping.  Again it would seem simple to plan but somehow managed to get exciting for me… The show jumping was set to begin at 8:30 but the top 25 would not be jumping until 3:00. After cross-country I was lying in 27th.  The jog was in reverse order of placing so I paid close attention and saw that 2 of the horses placed ahead of me were withdrawn before the jog.  We double checked with the stewards so it seemed I had move to 25th and would be 1st in at 3:00.  Quincy got to go back to his stall for his customary nap and Jeff and I planned to head up and watch the first session of show jumping but I did want to wait just long enough to see the official order of go posted since it was quite a trek to the main arena.  At 8:50, after several horse had already jumped, they posted the official times at the stables.  Much to my surprise I was down as the last horse in the morning session, jumping at 9:40 (and remember it takes 20 minutes to hack to the main arena…). A slight moment of panic set in as not only would we need to rush to get tacked up and ready but I had planned to go over the course with David later in the afternoon.  I did a quick scan of the list and counted 24 horses listed for the afternoon session… after a call to the organizers and a check with the ground jury it was decided that I should be in the afternoon session.  Of course it only took another 10 minutes for this decision to be made so by that time I was dressed, Quincy had studs in, and we were just about to put the saddle on…

. We wasted a good bit of time doing that (but not too much money) and then I filled the rest of the hours beginning the task of packing and making everything fit back into the trunks to ship home.  The day was delayed even more when the CIC horses had plenty of trouble and (I overheard) ended up breaking the frangible pin 8 times on the 2nd to last fence alone. 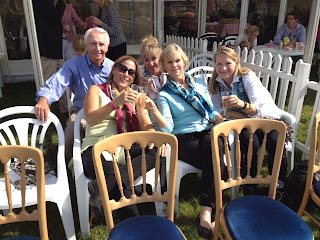 Show Jumping was pushed back to 3:30 and I was tacked up and ready to hack over at 2:30.  They were only planning to allow 10 minutes for the course walk just before the start so I needed to plan time for that. Little did I know that the reason the course wasn’t open was because of all of the interesting attractions being shown in the main arena.  One of which being two local hunts with their hounds…I found out when I saw them leaving the arena and coming straight towards me.  Quincy and I slightly diverted our path towards the arena to give them a little space and thankfully he was not set off by the whole display.  Then we were met in the warm-up area by roaring crowds as the bareback high jump was happening within the trade fair.  Here it appears it is made more exciting by starting with tack and having to remove a piece of tack in order to continue on so by the end they are all bareback and then the winner is the one that can jump 6 feet.  The cheering did make Quincy prick his ears and I’m pretty sure he thought they were all cheering for his arrival!

Warm-up felt great and for what we lacked on Saturday we made up for in a big way on Sunday.  Without a doubt we had our best round ever! The course was a series of related lines followed by sharp roll-back turns and we nailed all the distances and made quick turns to finish clear and within the time. 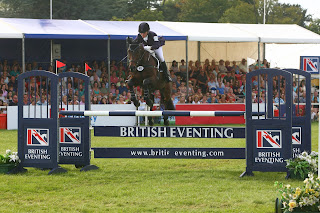 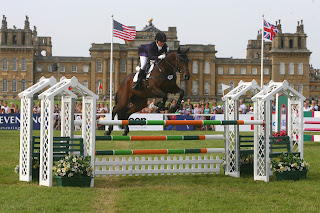 There were few in the morning session that were able to jump double clear so we kept Quincy in the warm-up to see if we might move up into the top 20.  However the afternoon session showed the caliber of horses and riders we were competing against as one after another jumped beautiful clear rounds with very few rails falling off the cups.  Jeff took Quincy back to get comfortable and I headed over to watch the finish with our group of supporters. My favorite horse to watch was Kitty King’s “Zidante” and the best ride was given by Mark Todd on his catch ride “Conair”.  He definitely worked to keep all the rails up on that one…

All in all an awesome experience that gave me a very clear vision of what it takes to compete on the world stage and I am so very excited to do it again (hopefully next year!). Win a Pair of Pipers!

Phillip Dutton Pulls Out All the Stops at Thoroughbred Makeover

Sunday Links from One K Helmets